The SNL short doesn’t seem to be available. “The Chronic…What?..cles of Narnia” will not be making an appearance.

But that wasn’t what my lazy Sunday is about anyhoo. Doug just took off and is headed back for his DnD campaign. Just a visit to get out of Kingston for a bit and I’d told him he had a place to stay any time he came back.

He’s firmly in the no-mana-cost friend category. Good to get a man-friend take on relationships and dating and just shooting the shit about everything. Whole bunches of debates regarding feminism, gender, accidental racism and sexism, politics in general. Good conversational meal. I hadn’t expected to see him much, but most of his friends were out of town so we hung out most of the weekend and it was easy.

Now I do the grading and course prep and all that I had hoped to do, but totally worth it to just hang and connect with a no drama friend.

Sidenote: finally got a chance to play with Chris and do the X-Wing game. Super satisfying. Great analog aerial fighting game with miniatures. Potential expensive habit…or, as Chris has offered…just play at his house. 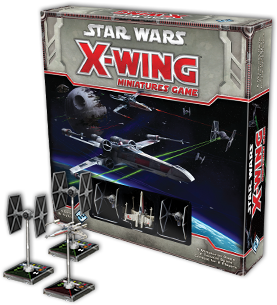 With its pivotal role at the Battle of Yavin, the Incom Corporation T-65 X-wing fighter claimed its place in history. Boasting high-powered laser cannons, proton torpedo launchers, and a reinforced titanium-alloy hull, this solid and dependable craft has earned its reputation as a staple in the Rebel Alliance’s arsenal against the Galactic Empire.

Control the most advanced starfighters and outstanding pilots in the galaxy! In X-Wing Miniatures Game, you take the role of squad leader and command a group of merciless Imperial or daring Rebel pilots in furious ship-to-ship space combat.

Featuring stunningly detailed and painted miniatures, X-Wingrecreates exciting Star Wars space battles from small engagements of only a couple of craft to large conflicts where multiple squadrons clash. Select and equip your ships, pick your crew, plan your attack, and complete your mission.